We left off in the previous article with the groundbreaking “Mother of all Demos”. Once into the ’70s, NLS was mostly used internally at the Standford Research Institute. There were a few events and issues that prevented further adoption. The user input required remembering numerical codes via the Chorded Keyset shown below.

It worked like playing the piano, where you could press a combination of the 5 keys as if you were playing a chord.

Other issues were the restrictions of the time-sharing computer mainframe systems. The creation of the more powerful Minicomputer was also less expensive to buy and use (in regards to electrical power requirements). Even though there were successful ports of NLS to the Mini, there was still a steep learning curve. Due to some disagreements between Douglas and his team over plans for NLS, many left to join Xerox at their Palo Alto Research Center (PARC).

Xerox PARC is not just responsible for the advancement in the graphical user interface, they also created the Laser Printer, Computer generated Bitmap graphics, and Ethernet to name a few. They were founded in 1969 as the Research and Development division of Xerox. Using the knowledge gained from NLS and the new Minicomputer architecture. Xerox’s Special Programs Group built their Minicomputer called the Alto. It was the first computer designed for use with a graphical user interface on March 1st, 1973. Here is a picture of it shown below. 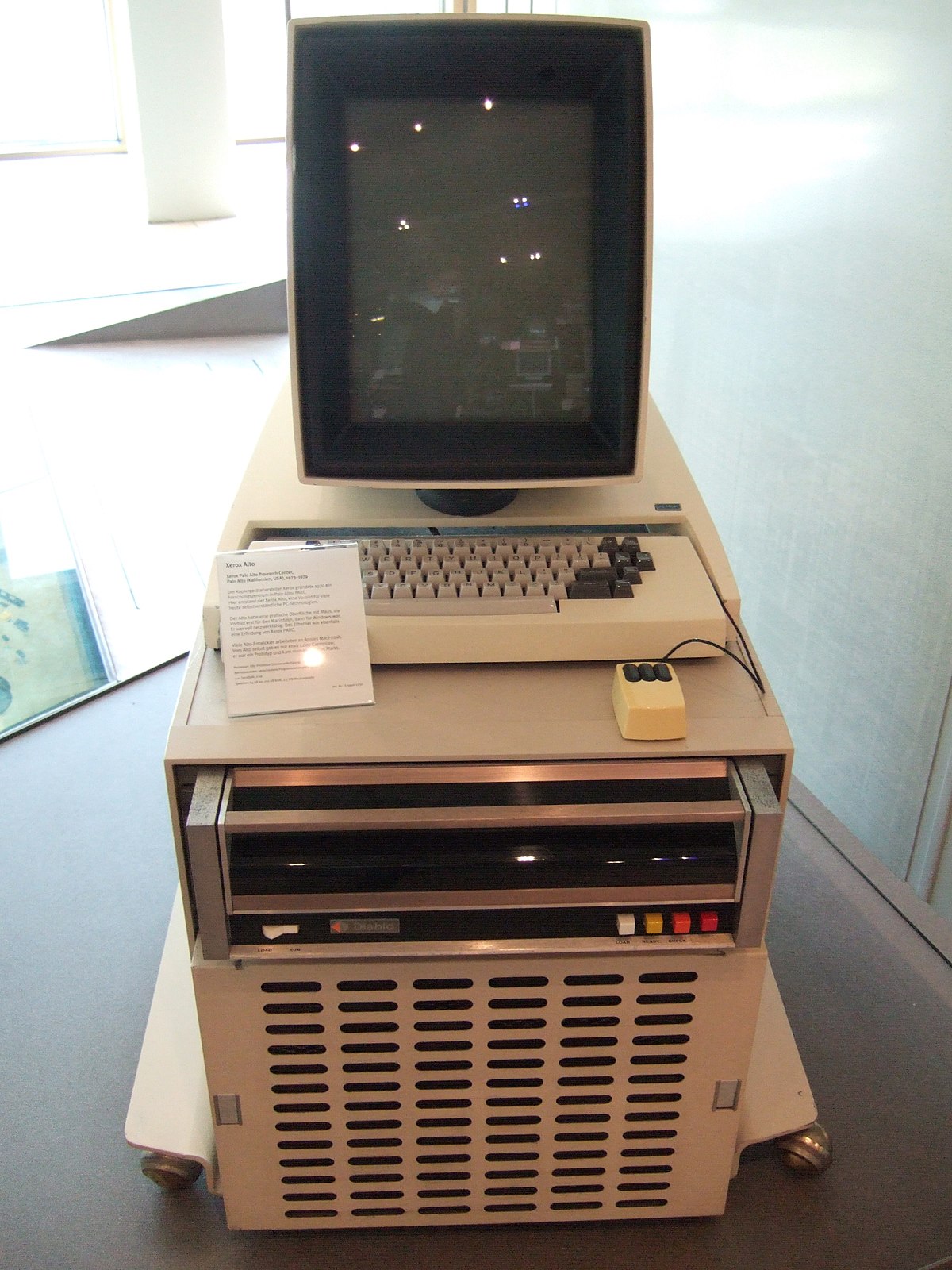 Some argue that Alto is the first personal computer, while others say it was a small Minicomputer. In either case, it was quite a machine for its day. It used a TTL-based CPU at 5.88 Mhz with 128 kilobytes of memory, 2.5 MB cartridge (like hard drive storage), 606 x 808 resolution monitor, keyboard, 3 button mouse, 5 key chorded keyset, and Ethernet. The Alto would boot using the Alto OS (the operating system) to a text command interface. You would need to type the command to load the program you are wanting to use. This new way of displaying text and graphics on the screen was called WYSIWYG (What you see is what you get). There is a dispute over the origin of that phrase. For our intent and purposes, I will use the 1974 release of Bravo mentioned below. It is believed to be the first use applied to computers.

Here is a list of some of the available programs (some dates and developer information could not be found) :

There wasn’t any spreadsheet or database software at that time. It wouldn’t be until 1979 that VisiCalc was created. It was the first spreadsheet program created by Dan Bricklin and Bob Frankston.

Listed below, I will link some YouTube videos to show how some of these applications looked and how the computer interfaces functioned on the Alto.

The Alto and the later Alto II, though never an official commercial product, sold 2,120 units (120 Alto and 2000 Alto II). In 1978 Xerox donated 50 units to MIT, Stanford, Carnegie Mellon, and the University of Rochester. Once these Alto’s were out in the public, they drew great interest. Two years later in 1975, an update was created, but I can’t find any references to specific changes compared to the original.

By 1977 Xerox began developing their first commercially available GUI computer called the Xerox Star. All design and development were done on the Alto II. During the same time, to compete with existing computer systems available at the time, Xerox also developed the Xerox 820. It used the CP/M (Control Program for Microcomputers) operating system, a predecessor to DOS; both were text-based interfaces. The 820 was sold with a smaller monitor using 24 lines of 80-characters, and a keyboard. None of the more advanced features in the Alto were used. Management inside Xerox didn’t see a market for the advanced features in the Alto and the only people that used the Alto was PARC. Most people inside the Xerox corporate offices requested the 820 over the Alto. The 820 was the first entry into the PC market for Xerox, but management was not sure of its marketability because of the company’s roots in laser printers. This unproven technology (by their assessment) made them wary of this business risk.

Once the 820 was released it was met with mixed reviews and acceptance. Many reviews of the 820 called it a ‘me too’ product which was more expensive than the competition. Though production of the 820 would continue until 1985. Xerox wanted to compete better in the market, accepted the risk, and created the Systems Development Department (SDD) in El Segundo, California to develop the Star. The Star was officially called the Xerox 8010 Star Information System.

SDD used what was learned from the Alto and Alto II with people from PARC to design the “Office of the future”. They upgraded the hardware to an AMD Am2900 CPU; 384 Kb of memory (3 times more than the Alto) expandable to 1.5 MB; 10, 29, or 40 MB hard drive; and an 8″ floppy drive. The monitor was upgraded to 17″ with a resolution of 1024 x 800 @ 38.7 Hz. They kept the 3 button mouse but opted to replace the 5 key keyset in favor of a redesigned keyboard. The new keyboard incorporated functions the keyset provided and added more. They found that the keyset was difficult to use by a wide group of people. The new keyboard included keys like delete, copy, and move that were previously performed with the keyset. Other keys were for typesetting functions like center, bold, italic, and underline.

Another advancement was called Pilot. It was a single-user multitasking operating system. Instead of booting to a command prompt like in Alto’s Alto OS, the Star loaded the graphic environment where you enter your username and password. This was the beginning of WYSIWYG (see discussion of the Alto, above) on the desktop. The key philosophy to this interface design was to mimic common office items already understood. For example, the filing cabinet holds documents, so there is a picture of a filing cabinet. Documents are displayed as file folders. Once logged in you would see the desktop which was another office metaphor. The GUI was much easier to use over previous designs. Clicking on a document would open the required application. The idea of cut and paste, though not invented by PARC or SDD, was used on the Star. An example of how you move one document to another folder: click the document and press the move key on the keyboard. locate the folder you want to move to, and click it with the mouse pointer. These same functions also worked in a document editor. Selecting text and pressing the delete key would delete that selected text. Sounds basic by today’s standards but in the late 1970s, this was a break thru in functionality.

Listed below are some videos showing how the Star evolved.

In 1979 Xerox reached out to Apple computer, which was located in the nearby city of Cupertino. Xerox had a lot of experience in manufacturing Laser Printers and producing them in volume but they were not sure they could handle the demand for their computers, since this was a new market for them. Apple already had its process down and was quite successful. Some deals were made between the two companies. Steve Jobs, the co-founder, and CEO of Apple Computer requested he be given some disclosure agreements on what Xerox PARC was working on. Xerox management agreed and was invited for multiple visits, to the surprise of the PARC researchers. I will post a video I found that explains the details from a first-hand account.

This is a very important part of history that changed the direction of the GUI. It has been misunderstood ever since. All of the computing systems at that time were text-based with some graphical applications. All input was via the keyboard. The use of the mouse was still non-existent. The light pens I mentioned in the previous article were used but not as commonly. Most interaction with a computer was done via the keyboard.

Apple had a successful run of their Apple I and Apple II series of computers using a text interface. In 1978 the Apple III was the next model using the text-based interface. Apple was also developing a new computer in the same year called the Lisa. It was also originally another text-based interface, but the goal was to make it more modern. This was a year after the initial development was when Steve was shown the Alto, mentioned above. After subsequent visits with members of his design team, the decision was made to re-think the design of the Lisa.

In the next article, I will bring us into the 1980s with a continuation of the development of Apple’s Lisa. The 1980s will be quite a formable decade for the GUI.

This site uses Akismet to reduce spam. Learn how your comment data is processed.

Except where otherwise noted, content on this site is licensed under a Creative Commons Attribution-NonCommercial 4.0 International License (CC BY-NC 4.0).